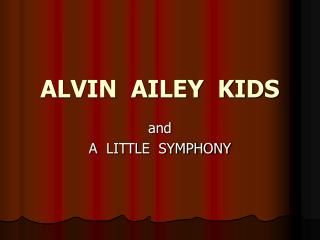 ALVIN AILEY KIDS. and A LITTLE SYMPHONY. VOCABULARY. Students one who studies. Perform act, sing, or play in public. Effort a work, an achievement. Remember recall, hold in your mind, memory. Mood state of mind, a feeling. Proud self-respectful, elated.

Animals of the Ocean: Who are they? - . by: emily burton. audience. elementary : 5 th grade marine animals-basic

The “ISH” factor - . get kids of all ages to think for themselves with a scientific approach to art. by: shannon

Rabies: What kids need to know! - . developed in cooperation with the massachusetts department of public health. what is

Introducing Presentando L.A. Kids Learn! - . what is l.a. kids learn! ?. a parent-involvement resource for students in

5 tips to keep your kids safe in school bus - Being a parent means a life full of responsibilities. of them all, the most

T-Traxx Kids Bag pack For School - T-traxx is manufacturer and supplier of kids backpacks for school . the fashionable

Kids In Daycare - A good daycare centers include a nice mix of activities during the day to teach different skills, such