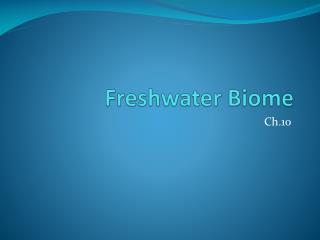 biome - . regions that have distinctive climates and organisms and that contain many separate but similar ecosystems.

Freshwater - . riley boyer. characteristics. lakes can range in size from small ponds to huge bodies of water. these

Biome - . by simon zaragoza . tundra . where it cold like the north and south pole. it rain about 15 to 25 cm of rained.

Freshwater - . by: alexis mathis and melvin gilmore, jr. introduction. freshwater is not a biome freshwater ecosystems

Freshwater - . lauren rapley. characteristics. a lake is a large body of fresh water. minnesota is known as the land of