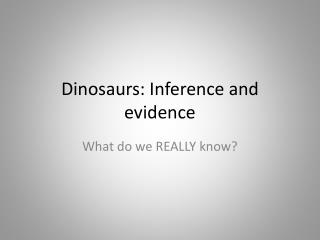 Dinosaurs: Inference and evidence. What do we REALLY know?. How does a fossil form?. 1- Death 2- Rapid burial (usually near water) 3- mineralization (water with sediments seeps through and bone parts are replaced with minerals) 4- erosion exposes fossils. Types of fossils. 9. Evolution Theories - . essential question: how does the evidence of geology, fossils, and comparative anatomy support

Ch. 41 - Reptiles - . unlike amphibians, reptiles don’t have to return to the water to reproduce. they were the first

The Evidence for Evolution - . evidence of evolution #1 – fossil record. fossils are the preserved remains of

Evidence of Evolution - . evolution is thought to have happened over millions of years. how can scientists be confident

Hey, A Dinosaur Sloshed in My Bathwater ! - This is a unit of scripted lessons explaining the water cycle. the lesson

Dinosaur Fossils - . by: dr. alvin granowsky. fossils. hardened remains of an animal or plant that lived long ago. the

Phylogenetic Inference - . involves an attempt to estimate the evolutionary history of a collection of organisms (taxa)