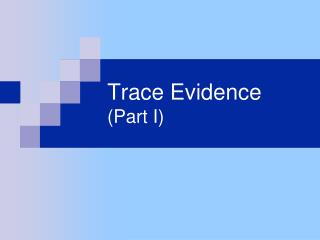 Fibers as Evidence - . another example of trace evidence. what is a fiber?. according to the fbi, a fiber is the

Trace Evidence - . objectives. you will understand: how to apply deductive reasoning to analytical data. how to follow

Trace Evidence 1 - . forensic geology. “life is hard. then you die. then they throw dirt in your face. then the worms

Trace Evidence - Trace evidence is physical evidence found in small amounts at a crime scene. common examples would be:

Lecture 20 Microscenes: Trace Evidence - Hair and Fibers - . the most common forms of trace evidence are bloodstains,

Impression Evidence - . “what does it tell us?”. essential question:. how can an impression be used to solve a

Crime-Scene Investigation and Evidence Collection - . objectives. are there cars parked on the sides of the road? what