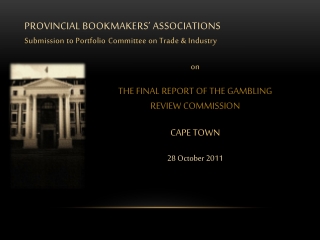 Careers in Non-Profit Management - Trade associations: comprised of businesses in a common industry, such as the

SUBMISSION BY BETFAIR LIMITED - . to the portfolio committee on trade &amp; industry in respect of the national

Bet365 - Http://www.bestbookmakers.net/bookmakers/bet365 i have been following sports betting industry for around 10

Building your Portfolio - Learning outcomes. an understanding of what constitutes a portfolio and why cilip requires this

PRESENTATION TO THE PORTFOLIO COMMITTEE ON TRADE &amp; INDUSTRY - . 2004-10-29. is the leading standardization body

ICD FREE STATE PRESENTATION TO THE Portfolio Committee on a - . period under review april 2008 – january 2009 at

IPO/SASFED presentation to the Portfolio Committee on Trade and Industry - . friday 16 th october 2009. why are we here?.