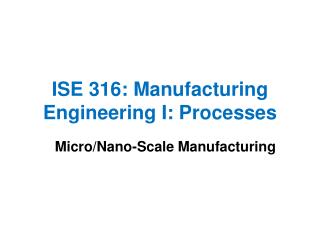 ISE 316: Manufacturing Engineering I: Processes. Micro/Nano-Scale Manufacturing. Outline. Historical Perspective and Introduction Why make things very small Sensors and Actuators Micro/nano-scale manufacturing processes. If at first, the idea is not absurd, then there is no hope for it. Chapter 4: Manufacturing Processes - . learning objectives. how production processes are organized trade-offs to be