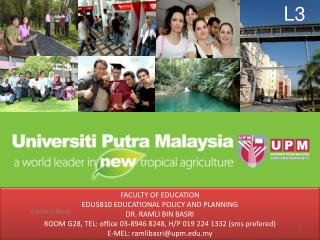 Planning for Higher Education - . advanced level. education and training smart goals. the best way to take charge of your

Faculty of Education UL: Vision and Mission of GE - 7th regional meeting on talent support in the central-eastern

Educational Policy to 1979 The Origins of Education - . education and equal opportunity, as policies of the british

Educational Planning Model - . at the end of the session, student is able to: explain steps in ep explain factors

Language Planning and Policy - . language planning. is all conscious efforts that aim at changing the linguistic behavior