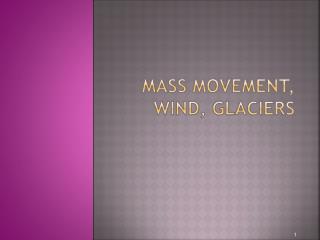 Mass Movement, Wind, Glaciers. Mass Movement. A down slope movement of loose sediment and weathered rocks resulting from the force of gravity.  Erosion following weathering climatic conditions determine which materials and how much  All mass movements occur on slopes

EARTHQUAKES - . how earthquakes shape and alter the earth’s surface. click on the yellow circle to go to the next

Glacier Basics - . an introduction to where, how, and why glaciers form. what is a glacier?. large mass of moving ice