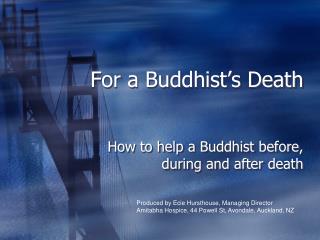 For a Buddhist’s Death. How to help a Buddhist before, during and after death. Produced by Ecie Hursthouse, Managing Director Amitabha Hospice, 44 Powell St, Avondale, Auckland, NZ. Who was Buddha?. Born 563 BC, in Lumbini, Nepal. Family name was Gautama, rulers of the Sakya clan. Unit8 - . cultural information. audiovisual supplement. watch the video and answer the following questions. 1. what is

Why &amp; How to Investigate Death and Dying - . lessons of 30 years. reflecting on the significance of endings.

Are you a Real Buddhist? - . two types of buddhists : nominal – a person who claims to be a buddhist, but does not