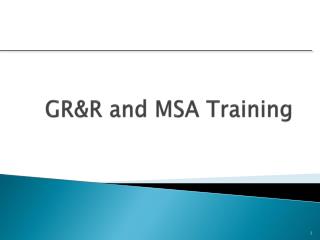 GR&R and MSA Training. Why GR&R or MSA?. Product Control: to prove a particular gage is capable of distinguishing good parts from bad parts and can do so accurately every time. Ideal situation is to have a measurement system: …that rejects ALL non-conforming parts

Softcrayons-Best IT Training Institute in Ghaziabad/Noida - Softcrayons is a leading it training company in delhi/ncr. it Training &amp; Development - . training as a management skill / training and developing your staff. topics. why do we

Employee Training - . the role of training money spent of training. according to the american society for training and

On The Job Training - . presentation by mark hoxmeier. what will be covered. on-the-job-training defined how