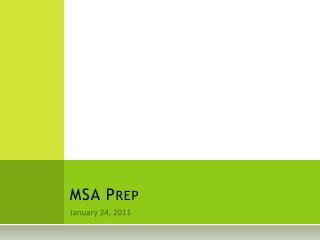 MSA Prep. January 24, 2011. What does the MSA look like? DAY ONE. Section 1 – 12 minutes 12 questions on vocabulary, skills like multiple meaning words, context clues, and straight-up definitions (“what does ‘arduous’ mean?” Section 2 – 42 minutes

MSA Mentorship - . extracurricular activities. your activities was it difficult to choose? i don't feel like doing

MSA Mentorship - . the mentorship philosophy building the bridge between islam &amp; education a tour of the college

MSA options - . advisory board jan 21, 2005. outline. where we are today what would msa look like resource requirements