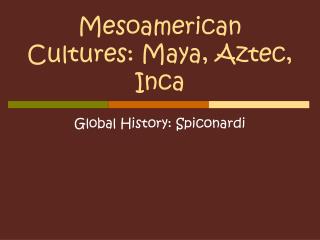 Ancient Cultures of Central and South America: The Maya, Aztec, and Inca - . mayan map. the mayans. the culture 's

Pizarro Conquers the Inca - . main idea : the riches of the aztec empire led other spanish conquerors to seek out their

Understanding the Aztec Codex - . social studies 8. what is a codex?. basically it is an illustrated history book. found

The Conquista of the Aztec and Inca - . what the spanish found…. empires in trouble. the spanish appeared on american

Maya civilization - . selyanina polina 10a. the maya is a mesoamerican civilization, noted for the only known fully

Empires of the South - . the maya, aztec, and inca established flourishing civilizations. achievements of the maya in

MESOAMERICA: - . maya, aztec, inca. essential question:. what are the similarities and differences between the three