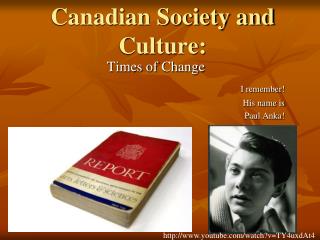 Canadian Society and Culture:. Times of Change I remember! His name is Paul Anka !. http://www.youtube.com/watch?v=TY4uxdAt4-M. Massey Commission. Formed in 1951 Goal: investigate the state of Canadian culture Results: suggested that Canadian culture needed protection from US influence Age and Society - . aging and society. age stratification varies from culture to culture. “being old” is master

The Concept of Culture - . think of 10 ways in which we use the word culture or cultural. eg. culture shock, canadian

CULTURE - . knowledge, values, customs, and physical objects that are shared by members of a society examples: art

Culture - . remediation assignment. what is culture?. culture can best be described as a society’s “way of life.”

CHAPTER 3: Culture and Society in a Changing World - . culture : is the knowledge, language, values, customs, and