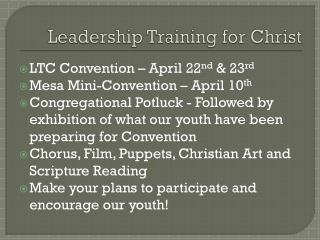 18 Statistics to Help Shape Your Millennial Training and Future Proof Your Organization - A war is coming. as the 76

Jesus Christ is Risen! - . it is appropriate that we pause in our study of prophecy to talk about the resurrection of

Med-Peds Residency Training - . uk medpeds is great!!!. goal of training. prepare residents to be knowledgeable and

LEADERSHIP - . articles: “effective leadership in a changing world” by glenn boseman , dba, clu, clf “are you a