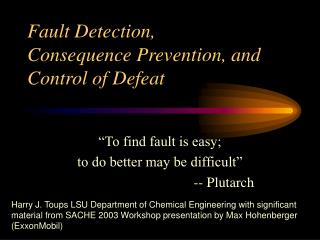 Fault Detection, Consequence Prevention, and Control of Defeat. “To find fault is easy; to do better may be difficult” -- Plutarch . Harry J. Toups LSU Department of Chemical Engineering with significant material from SACHE 2003 Workshop presentation by Max Hohenberger (ExxonMobil).

The US defeat at Pearl Harbor December 7 th , 1941 “A date which will live in infamy.” - . a politically motivated,

Fault Tolerance - . reliable system from unreliable components. principles of computer system (2012 fall). where are we?.

Module 4: Screening - . developed through the aptr initiative to enhance prevention and population health education in

Everything You Wanted to Know About Tanks But Were Afraid to Ask - . aboveground storage tank systems. outline.

GE Energy Pre Diabetes Intervention A Collaboration with Centers for Disease Control &amp; Prevention and the

Flow control and Error control - . ecs 152a xin liu. based on kurose and ross. our goals: understand principles behind