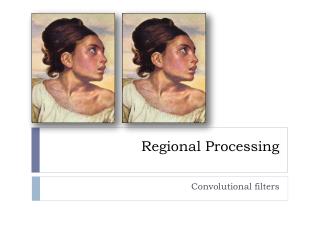 Regional Processing. Convolutional filters. Smoothing. Convolution can be used to achieve a variety of effects depending on the kernel. Smoothing, or blurring, can be achieved through convolution and is often used to reduce image noise or to prepare an image for further processing stages. Chapter 7 - . processing instruction and structured input. in this chapter we explore:. the nature of input processing