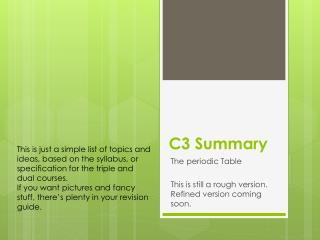 C3 Summary. This is just a simple list of topics and ideas, based on the syllabus, or specification for the triple and dual courses. If you want pictures and fancy stuff, there’s plenty in your revision guide. The periodic Table This is still a rough version. Refined version coming soon. C3 Contents - How to operate t his powerpoint select slideshow and click on “from beginning”. click once and this box

C3 revision - . links and downloads that will help with revision. aqa.

C3. Addition Polymers - . 3.1 describe and explain how the properties of polymers depend on their structural features 3.2