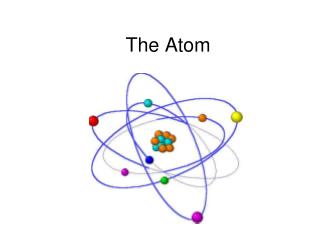 The Atom. What does an atom look like?. Draw a picture of what you think an atom looks like up close Open book to page 164 and compare your drawing to the picture of the Aluminum atoms. The beginning of Atomic Theory. Matter is made of particles that we call atoms. The Atom - . atomic clock atom bomb atom ant. what do you think?. draw a diagram of what you think an atom looks like.

The Atom - . history and structure. the atom. objectives summarize the observed properties of cathode rays that led

The Atom - . smallest particle of an element that retains the properties of the element. the beginning. democritus first

The Atom - . how big are subatomic particles in relationship to one another and to the whole atom? where are the

The Atom - . matter. is anything that has weight and takes up space. all matter is made of atoms. atom. since the atom is

The Atom - . chemistry vocabulary and notes. vocabulary - 1. element - substance that cannot be broken down into other

THE ATOM - . smallest part of an element that has all of the properties of that element. greeks and matter john

The Atom - . counting. the atom- september 5. pick up a chemistry textbook from the shelf take out one piece of notebook

The Atom - . law of conservation of mass. was discovered by antoine lavoisier helped moved alchemy to be chemistry mass

The Atom - . review class #1. theories of the atom. greeks matter is made up of tiny, discrete particles fire, earth,