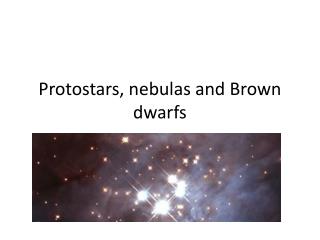 Protostars, nebulas and Brown dwarfs. Just before you meet with your black hole partner let’s talk a little more about protostars and star formation, use the following to enrich your posters on star formation.

Warm- Up - . brown fur is dominant to white fur in a type of bunny. draw a punnett square to show a cross between a

Skin - . the object of this presentation is to learn and identify skin lesions. describe the patient’s skin. normal

Encyclopedia Brown and the Case of the Slippery Salamander - . compiled by: terry sams pes. written by donald j. sobol

Chapter 13 - . the bizarre stellar graveyard. white dwarfs. ...are stellar remnants for low-mass stars. ...are found in

Dorothy Lavinia Brown - . black women surgeon. dorothy lavinia brown who is she?. not a research scientist not a nurses