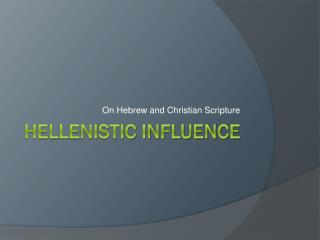 Hellenistic Kingdom - . prelude to rome. death of alexander. he did not appoint a successor before his death divided into

Hellenistic Dynasties - “he gave a splendid entertainment to nearchus , and then, although he had taken his customary

Hellenistic Greece - . alexander’s empire on the year of his death. what does mean to be hellenistic?. hellenistic -

Hellenistic Culture - . mr. hoch. group discussion. take about 10 minutes to do some more research over alexander the

Hellenistic Empires - . by: madeline thomas and morgan taylor. location and time. 323-31 bc, from the time alexander the

The Hellenistic World - . between alexander and rome. hellenistic is the name given for the time period between the death