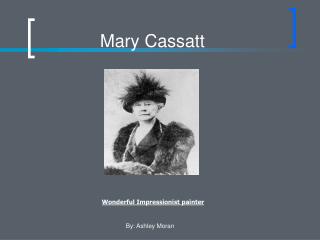 Mary Cassatt. Wonderful Impressionist painter. By: Ashley Moran. Ms Cassatt was born in Allegheny City, Pennsylvania on May 22 1844. She never married and past away on June 14, 1926. Studied in Pennsylvania academy of fine arts from 1861 to 1865

Christ “appeared first to Mary Magdalene , out of whom he had cast seven devils.” - She does not seem to have been

Cryptography and Mary Queen of Scots - . alice yuyen chang spring 2004 at chang gung university a lecture given in

IHS Health Education Program Mary.Wachacha@ihs.gov - The documentation of breastfeeding education in the ihs to meet the

Mary Rowlandson &amp; The Captivity narrative - . born circa 1637 in england.  her parents john and joan white were

MARY IN THE GOSPELS - . the reader of the gospels is at first surprised to find so little about mary; but this obscurity

Angeline Bakkila - Is a mary kay beauty consultant for the past two years. angeline bakkila suggests people to use mary

Mary Shelley and Frankenstein: An AP Introduction - . when?. in the summer of 1816, 19 year old mary wollstonecraft