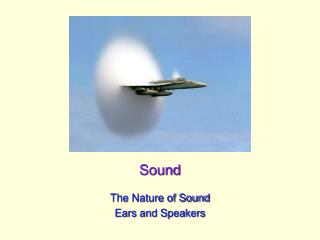 Sound. The Nature of Sound Ears and Speakers. What IS Sound?. Sound is really tiny fluctuations of air pressure units of pressure: N/m 2 or psi (lbs/square-inch) Carried through air at 345 m/s (770 m.p.h) as compressions and rarefactions in air pressure. wavelength. compressed gas.

Chapter 11 - Sound - Sound waves are longitudinal waves with rarefaction and compression. as an object’s vibration

SOUND - Light. &amp;. sound. &amp;. light. sound. we study light and sound together because they are both forms

Sound - . sound is a wave created by vibrating objects and propagated through a medium from one location to another.

Sound - . sound waves. sound waves are longitudinal waves. the source of a sound wave is a vibrating object. only certain

Sound - . sound waves. sound waves are longitudinal waves they cause particles of air to vibrate back and forth. a medium

Sound - How does the amount of water in a glass affect the pitch of sound? . lower pitch. higher pitch. ml. sound.

Sound - . overview. the facts of sound the ear and sound sound vocabulary musical instruments and sound. the facts. sound

Sound - . how sounds are made. what happens when a bell shakes or a drum moves up and down? vibrations occur – sound is