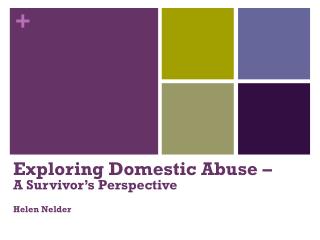 Exploring Domestic Abuse – A Survivor’s Perspective Helen Nelder. The Paradox of Problem Solving!. “The world we have made, as a result of the level of thinking we have done thus far, creates problems we cannot solve at the same level of thinking at which we created them.” Albert Einstein

Helen Keller - . &quot;we are never really happy until we try to brighten the lives of others.&quot; - helen

The Trouble with Tuck - The setting . the story occurred at a little girl's house. helen is the little girl. it was