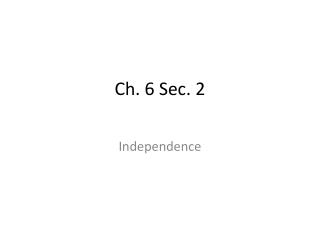 Ch. 6 Sec. 2. Independence. Thomas Paine wrote an essay—Common Sense—urging the colonies to declare independence. Paine and other radicals—people who want to make drastic changes in society—began to think of creating their own nation. Against Independence--Many colonists felt loyal to Britain. Ch 6, Sec 2: Hinduism and Buddhism - . hinduism. 3 rd largest religion of the world brought to india with the

Ch 6 Sec 2 I. Townshend Acts - . another attempt by england to raise $ suspended ny’s self government until they obeyed

Ch. 34 Sec. 2 - . patterns of behavior. i. behavioral cycles. many animals respond to periodic changes in the environment

Ch. 15 Sec. 2 - . ideas that shaped darwin's thinking. radical views most people believed the earth was only a few

Ch.24 Sec.2 - . the partition of africa. africa in the early 1800’s. north africa: contained the sahara and fertile

Ch. 27 Sec. 2 - . the moon. the moon, earth’s nearest neighbor in space, is unique among the moons in our solar system.

Ch 15 Sec 2 - . the early cold war years. containing communism. overall, it becomes the goal of the us to contain

Ch. 1 Sec. 2 - . methods of scientists. 1. which objects in this photograph are used for measuring? 2. for what kind