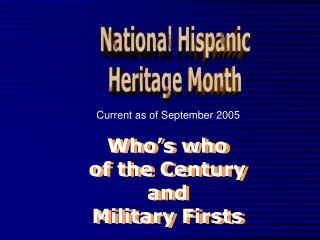 National Hispanic Heritage Month. Current as of September 2005. Who’s who of the Century and Military Firsts.

Asian Pacific American Heritage Month May 2011 - Introduction. the month of may denotes the national celebration of asian

Working to Improve the Lives of Hispanic Older Adults,  their Families, and Caregivers - National hispanic council on