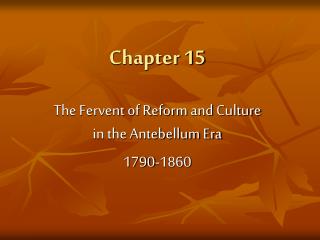 Chapter 15. The Fervent of Reform and Culture in the Antebellum Era 1790-1860. Reviving Religion. “ All churches were set up to terrify and enslave mankind, and monopolize power and profit.” –Thomas Paine Deism: Relied on reason, rather than revelation.