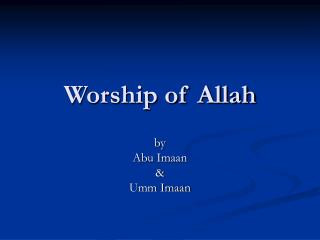 Worship of Allah. by Abu Imaan & Umm Imaan. Two Main Groups of People. The adherents to Islam and possessors of faith, guidance, tawhid, sincerity, knowledge, divine legislation, those who follow the Prophets and Messengers Worship of Allah - . by abu imaan &amp; umm imaan. two main groups of people. the adherents to islam and possessors

Prophets of Allah - Prophet ayyub (‘a). prophets of

Names of Allah - . allah. this is the personal name of the creator of the universe who is the found of all exalted

Place of Worship - 1. place of worship. what do we mean by ‘place?’ in our hearts? in our lives? planet earth? in the

Heart of worship - . when the music fades, all is stripped away and i simply come, longing just to bring something that's

Heart of Worship - (1). heart of worship. when the music fades and all is stripped away and i simply come, longing

ALLAH - . in the name of allah the infinitely good the boundlessly merciful. coming together is. begining. keeping

Places of worship - . any building where the guru granth sahib is kept is a sikh place of

Places of worship - . sikhism is the youngest of the world's religions, being founded in the 15th century. it is called

Manner of Worship - . alive in the spirit assisted by the spirit active thru the spirit. attitudes of worship. joyful

PLACES OF WORSHIP - . arson risk reduction bradford fire prevention. arson prevention. most of the fires in places of