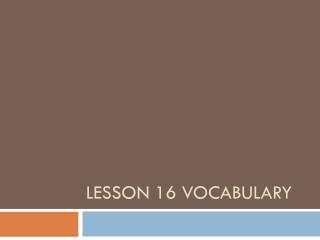 Lesson 16 Vocabulary. Annihilate (verb). The Black Death, a plague carried by rodent fleas, annihilated millions of Europeans in the fourteenth century. More than one third of the population of Europe died of this disease.

English II Vocabulary Lesson Four - . 1. bigot n. one who is intolerant of differences in others syn: racist; extremist

Vocabulary Lesson 18: - . disagreement &amp; conflict. by: bad as company (aka: sanch,zun,wen,gus ). affront. to

Vocabulary Lesson 2 - . iskills 2b. corpse (n): a dead body, usually of a person. when given all the data about a corpse,

Vocabulary Lesson 8 - . blockade the closing off of an area to prevent entrance or exit. i ndestructible not capable of

Lesson 16 Robust Vocabulary - . what would be more charming , a monkey that pops out of a box when music is played or a