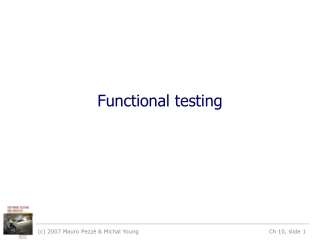 Advanced Material - . the following slides contain advanced material and are optional. outline. testing what is testing

The Importance of Data in Functional Testing - . james lyndsay workroom productions. data is important to functional

QTP Online Training By Real Time Experts - There are numerous tools which can helps us in automation of testing. the

Non-Functional Testing - . why is this so often done badly or not done at all? can we build a test managers toolkit to

Functional Progressions &amp; Functional Testing in Rehabilitation - . chapter 16. how do you move forward in rehab?.

Testing in NetBeans - . testing. the ideal test: when the test is passed, the product is ready for delivery! ideal –