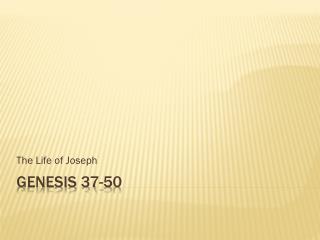 The Life of Joseph. Genesis 37-50. Unconfirmed as a type Lived over 1700 years before Christ Parallels Christ in over 100 aspects Takes up more chapter space than any other single person in Genesis A patriarch – and an excellent example to us with his incredible character. IPHS FOR PHC - . iphs genesis. nrhm aims:- to reduce child and maternal deaths, to stabilize population and to ensure

Genesis Chapter Twenty-five - . bible bowl 2013. genesis 25:1.  what was the name of the wife abraham took after the

Genesis Chapter Seventeen Questions - . bible bowl 2012. genesis 17:1.  when did the lord appear to abram, after ishmael

GENESIS: THE STORY OF CREATION - . presentation by:. world literature i. ralph monday. creation of adam 1512 michelangelo

Genesis Offices including The Genesis CDA Training and Resource Centre for the local community - . august 2010. 1. who