Who Pays When I Sin? - PowerPoint PPT Presentation 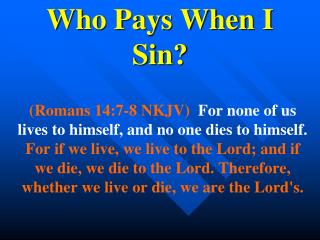 Who Pays When I Sin? Who Pays When I Sin?. (Romans 14:7-8 NKJV) For none of us lives to himself, and no one dies to himself. For if we live, we live to the Lord; and if we die, we die to the Lord. Therefore, whether we live or die, we are the Lord's. The Sin of Adam and Eve.

Who Pays When I Sin?

Education, Rustication and Communist Party Membership: What Pays? What Does Not Pay? - . hongbin li junsen zhang (others)

Cymru -Wales- Le Pays de Galles - . who are the welsh?. the word ‘welsh’ was given to the celtic-speaking britons by

Isaiah 33 - This is a chapter with a little psalm, some exhortation to worship and faith, some prophecy about the near

Religions through the Bucks Agreed Syllabus - . bucks primary re conference february 2013. re lig ion. to understand the

The Herbalife Business Opportunity - . how it works and how to get started. who is herbalife?. one of the largest

BASICS NAVIGATION - . introduction. the rule jar-fcl 1.130, the candidate to ppl must demonstrate the appropiate theoric

Minimum Wages Act 1948 - . history of minimum wages. ilo convention no26 in1928 recommended machinery for fixation of

Total Synthesis of ( ‒ )-Colombiasin A and ( ‒ )-Elisapterosin B by two different approaches - . a presentation by

Mannatech’s new enhanced compensation plan - . 1. why the need to enhance?. mannatech pays out a total 42% in

Nehemiah 5 - . trouble from inside. introduction. what impact do selfish motives and greed have on people’s ability to

Welcome - Adult ii couples class. welcome. discoverjoy.com. do you do prefer working alone or with a group of people?.

The northern Renaissance &amp; the Scientific revolution - . the dawn of the modern age. information age 1.0 –