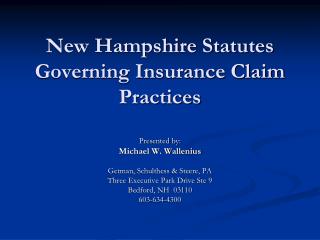 Welcome to Hampshire Constabulary - . new joiner. welcome from chief constable andy marsh. i am delighted to welcome you

NAHU - . ethics in business. why? maybe it’s because the insurance industry is so highly regulated. maybe it’s

Steam Turbine Governing System - . prepared by: nimesh gajjar. definition of governing “a system whose purpose is to

A Strategic Conversation About the Future of the New Hampshire Bar - . presentation by charles f. robinson clearwater,