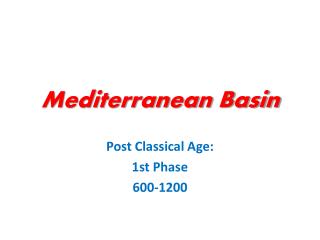 Developing Hydrocarbons in Europe and the Mediterranean Basin - . notes. why the european focus?. europe disenchanted by

THE HISTORY OF THE MODERN MEDITERRANEAN BASIN MESOZOIC TO HOLOCENE - . location of places discussed in many med

Mediterranean - . there are three european countries that lie along the mediterranean sea: spain italy greece . diet.