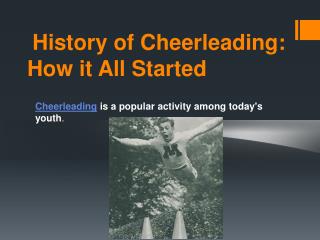 http://bit.ly/cheer-and-dance Cheerleading is a popular activity among today's youth. Today, this activity is even considered as a separate competitive sport and there are various organisations across the globe that regularly hold competitions and exhibitions for cheerleaders. Competitive Cheerleading - . by: hannah. definition of a sport. sport is defined as a physical activity that is governed

A Patient with Pancytopenia - . history: part 1. a 34 year-old woman is seen by her dentist for bleeding from her gums.

Getting Started With C++ - Christian schulte cschulte@kth.se software and computer systems school of information and

Getting Started - . name and role experience with common core 1 – novice 5 – prepared to lead this work agenda