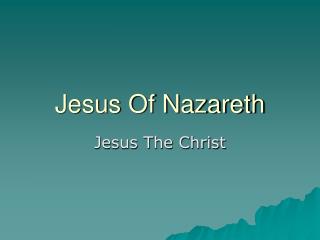 Jesus Of Nazareth. Jesus The Christ. INRI Iesus Nazarenus Rex Judeorum Jesus of Nazareth King of the Jews. Chi-Ro Greek for Christos. The Incarnation. The Incarnation The Reason for The Season Baby!. Literally means to “take on flesh” Jesus of Nazareth - . matthew 16:21 from that time forth began jesus to shew unto his disciples, how that he must ... be

The Story of Jesus “ Jesus of Nazareth: the Son: Part 1 ”

Section 4: The Rise of Christianity I. Jesus of Nazareth - Jesus was a descendant of king david and was believed to be

REFERENCING AT NAZARETH COLLEGE - . wh at is referenc ing ????. when you are writing an assignment you must acknowledge

Can anything good come out of Nazareth - According to some historians, nazareth was a humbled, agricultural, village.