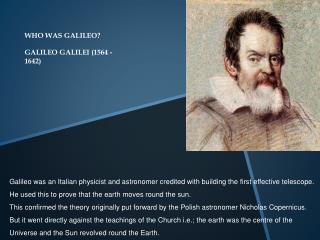 WHO WAS GALILEO? GALILEO GALILEI (1564 -1642). Galileo was an Italian physicist and astronomer credited with building the first effective telescope. He used this to prove that the earth moves round the sun. Galileo Galilei 1564-1642 - From spyglasses to space telescopes or a saga that began with galileo. galileo galilei

Galileo Galilei (1564-1642) - This presentation will probably involve audience discussion, which will create action

Chapter 3 Force and Newton’s laws - . section 3-1 classical mechanics. the approach to the dynamics we consider