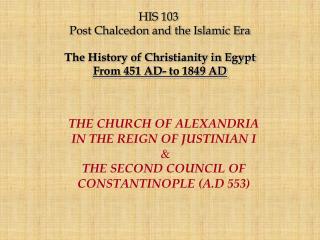 The History of Music in Christianity - . influence of the music of the hebrews: music was primarily vocal, a servant of

The History of Egypt - . 8 th grade. ancient civilization. as a result of egypt’s layout, a vast desert protecting a

KHRUSHCHEV The Man and His Era - . by william taubman. his early

Pre-Islamic Christianity - . first to seventh century. apostolic age. •about 30 ad until the end of the 1st century

History of Christianity - . christian history begins with jesus of nazareth, a jew who was born in a small corner of the

History of the Victorian Era - . by: caitlin sands. timeline. 1837: queen victoria claims the throne 1845: beginning of

Predynastic History of Egypt: Egypt Before the Pharaohs - . evidence suggests that a sophisticated culture existed before

History of Christianity - . why do i believe the bible is true. what is at stake ?. is there a god ?. yes. no. have fun

The Post- Perón Era - . military-civilian conflict and the rise of terrorism. military governments since 1955. basic