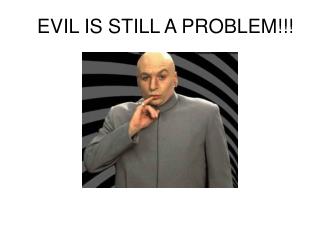 EVIL IS STILL A PROBLEM!!!

EVIL IS STILL A PROBLEM!!!. ETHICS SLIDES. © Robert Barnard 2006. Ethics and Morality. Morality – from the Latin ( mores) for conduct -Right vs. Wrong -Focuses on acts Ethics – from the Greek ( ethos) for character -Good vs. Bad -Virtue vs. Vice

EVIL IS STILL A PROBLEM!!!

The Problem of Evil and Suffering - . here we consider an argument as to why god might not exist. evil. a prime argument

The Philosophical Problem of Evil - . the only effective argument against the existence of a maximally perfect god is

NTP and Evil - . geoff huston, randy bush . the e volution of evil. it used to be that you sent evil packets to your

Jewish Responses to the Problem of Evil - . what does the story of job tell us about the existence of evil, and how to

“The Psychology Of Evil” - . questions to be addressed. can good, ordinary people be transformed into monsters or

The Problem of Evil - . mackie – “a wholly good omnipotent being would eliminate evil completely; if there really are

The origin and nature of evil - . central question for the next few weeks: what's wrong with us? why does human life and

The Problem of Evil and Pain - . 3. the explanation of leibniz: the best of all possible

The Problem of Evil II - . mackie on the logical problem and swinburne’s theodicy. j.l. mackie. a very compact version

The Problem of Evil: How Can an All-Good, All-Powerful God Exist and There Still Be Evil in the World? - . dostoevsky: