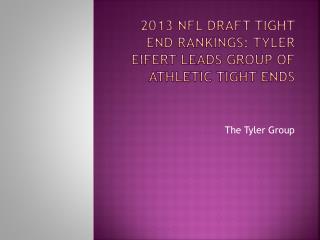 If nothing else, the upcoming tight end class for the 2013 NFL Draft has potential. The obvious standout of the group is Tyler Eifert of Notre Dame. Even with a shaky quarterback situation for the Irish, Eifert finished with 63 receptions for 803 yards and five scores a year ago. He may not profile to be the next Rob Gronkowski or Jimmy Graham, but he's better than former Notre Dame tight end Kyle Rudolph. He'll have to make it this year with sophomore Everett Gholson starting for the first time for Notre Dame. Eifert isn't the only one who has to deal with quarterback inconsistency. Joseph Fauria of UCLA enters the season as the top senior tight end, but the Bruins have struggled to find a steady quarterback. Ohio State's Jake Stoneburner is loaded with talent, but plays with Braxton Miller, a quarterback who often seems more comfortable using his feet than his arm. More on Rankings - . query-independent lar. have an a-priori ordering of the web pages q : set of pages that contain the

BANKING LAW AND OPERATIONS - . the objective is to familiarize the students with the law and operations of banking. unit

DIOCESE of TYLER - . diaconal formation program. as we begin our journey together. dear students, i am fr. tim kelly,

Compact toolkit: working draft - . working draft. december 22, 2010. confidential and proprietary any use of this

Good leads, bad leads, - . and everything in between. bad leads. she spent three weeks living as a bag on the streets of

Ad Analysis - . got milk? jennifer and estelle. outline. i. the powerful image a. color b. the figure of steven tyler ii.

Approaches to Environmental Measurement - . barbara m. altman. thanks to committee members. excellent responses to the

College Ranking Metrics - . where does umkc fit in the rankings?. why pay attention to rankings?. although rankings are