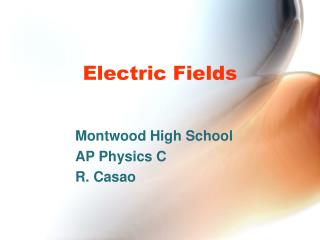 Electric Fields - . fields: action at a distance. remember in the lab, a charged balloon was able to attract small pieces

Electric fields 電場 (chap. 22) - . the coulomb’s law tells us how a charge interact with other charged particles,

Chapter 21 Electric Charge and Electric Fields - . what is a field? why have them? what causes fields?. electric charge.

TOPIC 6.2: Electric Fields and Forces - . these notes were typed in association with physics for use with the ib diploma

Lesson 7 Gauss’s Law and Electric Fields - . today, we will: learn the definition of a gaussian surface learn how to