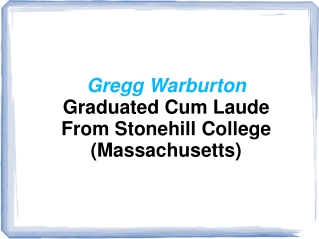 Stonehill College Global Warming: Learn what it is. Learn what you can do. Cheryl Schnitzer - Associate professor

Foreign Words and Phrases - . 1. alma mater : a school, college, or university which one has attended or from which one

The American Dream Gone Wrong - . by: brittany roman. ben mezrich. bringing down the house: the inside story of six mit