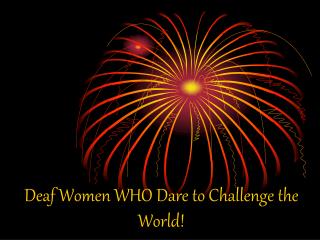 Deaf Women WHO Dare to Challenge the World!

Deaf Women WHO Dare to Challenge the World!

Anne Klein “Clothes aren’t going to change the world; the women who wear them will.” - Meghan sabo. anne klein

Linda Bove Born- November 30, 1945 - . bove was born deaf and both of her parents were deaf.. linda was treated the same

Dare To Stand Like Joshua - . we are bound for canaan land, tenting by the way. who shall lead us on the road? choose

Famous Deaf P erson Presentation - . shaleigh chandler a-4. loue ferrigno. did he make an impact on how deaf people are

Dare It Now People do crazy things for money… - . logan rodzen. the idea. earn cash for completing dares dares are

Poetry… Do I Dare? - . i ask them to take a poem/and hold it up to the light/ like a color slide… but all they want

Welcome to Deaf World - . by: natalie gordinier. what is deaf world?. over 30 million deaf in usa alone a difference in

Women’s Clothing in the Ancient World - . erica dawn nelson. egyptian. tube dresses to ankle, with straps over the