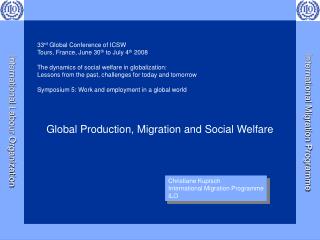 Global Production, Migration and Social Welfare. 33 rd Global Conference of ICSW Tours, France, June 30 th to July 4 th 2008 The dynamics of social welfare in globalization: Lessons from the past, challenges for today and tomorrow Symposium 5: Work and employment in a global world.

Internal/International Migration and the Environment - . notes for class: there are changes from syllabus – so check

SSE – 110 Introduction to Social Welfare and Social Work - . chapter 2 social work as a profession and a career. social

Topic 5 – Migration and Health - . a – global demography b – international migration c – health and epidemics. a

Migration Issues - . lecture 3. outline. stylized facts on immigration towards the eu and the usa importance of the

THE ECONOMY AND WORK - . economy social institution that ensures the production, distribution and consumption of goods