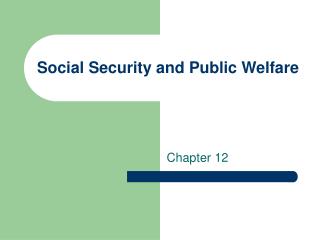 Social Welfare - . wilson 19. objective questions. who governs? . to what ends?. how, if at all, have americans’ views

Social Welfare - . lazy bums...all of them. we should measure welfare's success by how many people leave welfare, not by

Social Welfare - . the impact of crime on

Modeling effects of pollution on public health and social welfare - . energy efficiency and sustainability policies in

Fairness and Social Welfare Functions - . deriving the utility possibility frontier (upf). we begin with the edgeworth

Social Welfare System - . ....those goods and services that a society believes to be a collective responsibility.