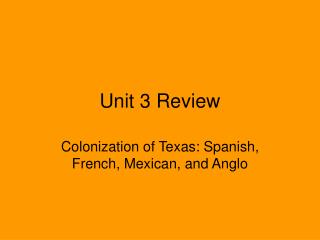 Unit 3 Review. Colonization of Texas: Spanish, French, Mexican, and Anglo. Why were France and Spain in a struggle to occupy Texas?. Both countries wanted to possess the gold and silver that they believed were in the territory.