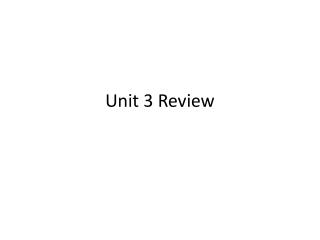 Unit 3 Review. 1. What force was represented when the pepper moved to the middle of the swirling plate?. 2. What event did the floating pepper represent when it moved to the outside of the plate?. 3. Gravity pulls in on the material that makes up stars until what process occurs?. 4. Unit 3 Review - . this version is for posting to the class web site. genes are located on chromosomes and are the basic

Unit 3 Review - A nation is born. unit 3 review. american writers during the age of reason were concerned with science,

Unit 3 Review - . callie davis. where does carbon come from?. can we recycle…. matter? energy? both?. photosynthesis.

Unit 3 Review - . terms and applications. general terms. nature vs. nurture— the debate in psychology over the relative

Unit 3 Review - . by: mrs. rockwell. what is conservation?. working to save or protect resources. what is a continent?.

UNIT 3 REVIEW - . elements. if the formula has one capital letter, it is an element, and its name is what is found on the

Unit 3 Review - . colonization of texas: spanish, french, mexican, and anglo. why were france and spain in a struggle to

Unit 3 Review - . put the following events in order. . creation of the bill of rights. victory at the battle of yorktown.

Unit 3: Review - . in 1849 thousands of people came to california because a. it was a free state. b. it offered cheap