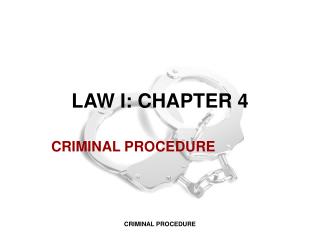 LAW I: CHAPTER 4. CRIMINAL PROCEDURE. DEFENSE CLASSIFICATIONS. In criminal law, a defense is a legal position taken by an accused to defeat the charges. Defenses are classified as either substantive or procedural. SUBSTANTIVE DEFENSES. Chapter 4 - . politics and law. learning objectives. to understand the importance of the political and legal environments

Chapter 4 - . 2 nd law of thermodynamics. 4.1 general statement of the law the first law is an empirical statement