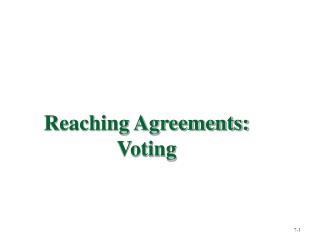 Reaching Agreements: Voting. Voting. Truthful voters vote for the candidate they think is best. Why would you vote for something you didn’t want? (run off election – want to pick competition) (more than two canddiates , figure your candidate doesn’t have a chance) Voter Turnout and Voting Behavior - . govt 2305. previously we discussed democracy, elections and the right to vote in

Voting in America - . the right to vote. history of voting rights. the framers of the constitution purposely left the