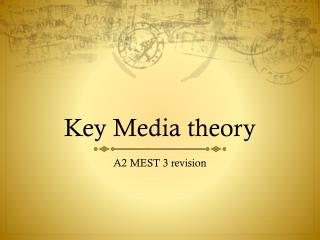 Key Media theory. A2 MEST 3 revision. Feminism. One of the first groups to draw attention to representations within the media Media Technology I - . lecture notes and tutorials on: web : www.staff.city.ac.uk/~raj. aim of this module. describe the

Developmental Views of Delinquency - 2. life course theory. developmental theory is the view that criminality is a

Audience theory - . aim: to investigate a number of theories relating to media audiences. you will learn about: the

Audience Theory - . key questions for g325 q1b. who is the target audience for the production? define by age, race

Cognitive Theory of Multi-Media Learning : Guiding Principles for Designing Media Presentations - . based upon