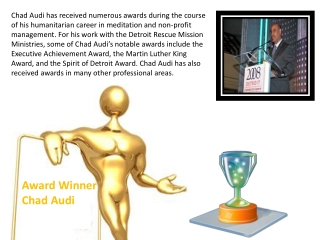 Chad Audi has received numerous awards during the course of his humanitarian career in meditation and non-profit management. For his work with the Detroit Rescue Mission Ministries, some of Chad Audi’s notable awards include the Executive Achievement Award, the Martin Luther King Award, and the Spirit of Detroit Award. Chad Audi has also received awards in many other professional areas.

Chad - . by: jessica’ lynn harnden. this is africa. chad has a big problems with no food. . chad is has a low

Chad landforms - . mountains lakes oases rivers springs volcanoes. picture of lake c had . this is a picture of the long